I never paid enough attention to LuxRender, so the other day I decided to play a little bit with it. Installation on linux (debian wheezy 64bits) with blender 2.57 is easy (download the luxrender 64bit binaries, download the blender addon, copy pylux.so from the binaries to the addon, activate it and that's it). This is luxrender 0.8, so it already has (preliminary) support for GPU rendering, and the addon is really impressive already, totally integrated into the different panels of blender (scene, materials, lights, world, etc...).

The only thing I couldn't make work is rendering transparently in blender, that is, without opening any luxrender window. This is due to the luxrender binary I downloaded being compiled with a different libpng version than mine. I could of course compile luxrender, but there are some problems with the version of openCL libs I have in debian (of course lux needs the most advanced available...) and I got too lazy to look for a solution.

Anyway, rendering without opening the luxrender interface makes you miss a great feature, which is the ability to tweak your image whil it is rendering...

This is the image I managed to produce (2h rendering): 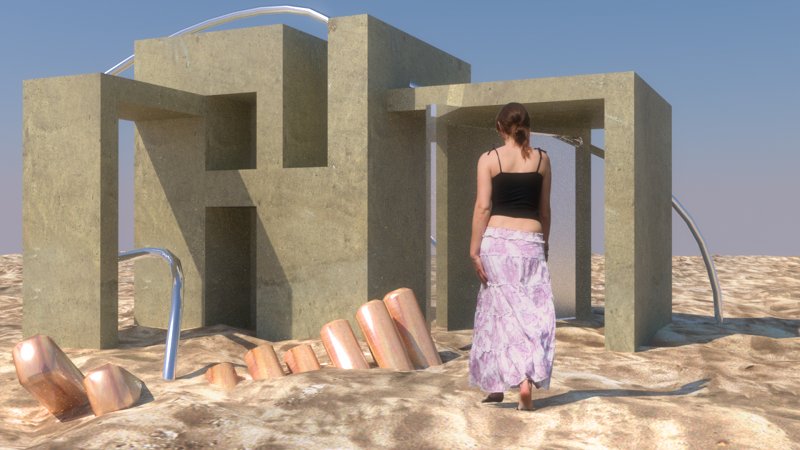 The light setup is dead simple, place one sunlamp, orient it the way you want, that's it. No setting, no tweaking. The geometry has nothing particular, lux respects all modifiers, the geometry is rendered just exactly like blender.

The materials is of course the main focus when you work with another renderer. But with this latest addon, things are really not too complicated. The blender materials panels get changed by luxrender, and you have many cryptic options to look at, but the system is simple: Choose one of the presets, change the color, change the texture and that's it. Special materials such as glass also have further presets to choose from. Textures can be either normal blender textures, or special lux textures (set from the same textures panel) which have many further options. One detail, though, all objects must be UV-mapped. And you can only add one diffuse texture.

In the image above, sand and concrete are common "matte" materials with a normal blender texture. Inox is a standard lux "glossy metal" material, the wood is a "glossy" material with a blender texture, and the character is a vertical plane with an alpha texture. This one has to be set as lux texture in order to take alpha channel intoo account. Finally I added a little bit of bloom in luxrender while rendering the image.

It really doesn't take long to get used to how luxrender works. To newcomers to luxrender, I would suggest first to test light setup, without putting any material. If the light comes good, then go ahead, put materials. Another important thing, you can take a normal blender file, already set up with blender materials, add a new scene linking objects, and start tweaking luxrender settings and materials in that new scene, your original blender materials will remain the same in your original scene (luxrender only "adds" information to the materials, does not modify them). And there is now a button called "convert blender material" which automatically creates a lux material based on the original one. But I found it better to do it by hand, because the result is not always like you want. Anyway, outside the fact that you must UVmap everything, you can get on tracks pretty fast.