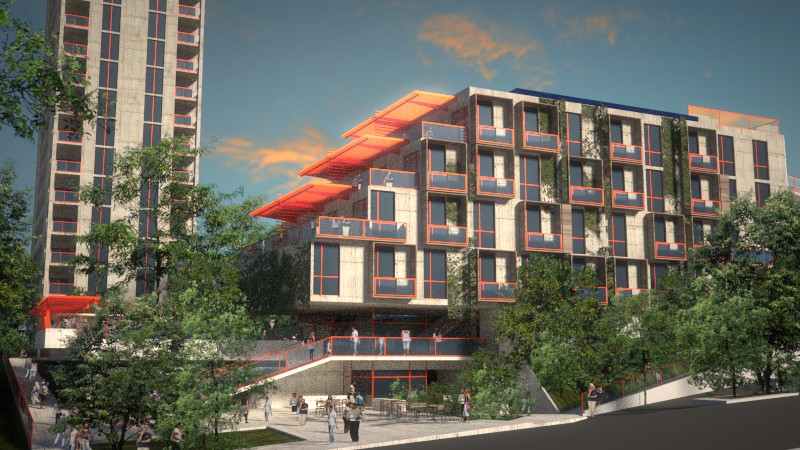 This project gathers in a same site three different uses: a residential building, a hotel, and a convention center.

The client being a real-estate investor, it was required, as usual in that context, to build as much as possible, in other words, to use the maximal construction area permitted by law. This produces a project with a lot of construction. 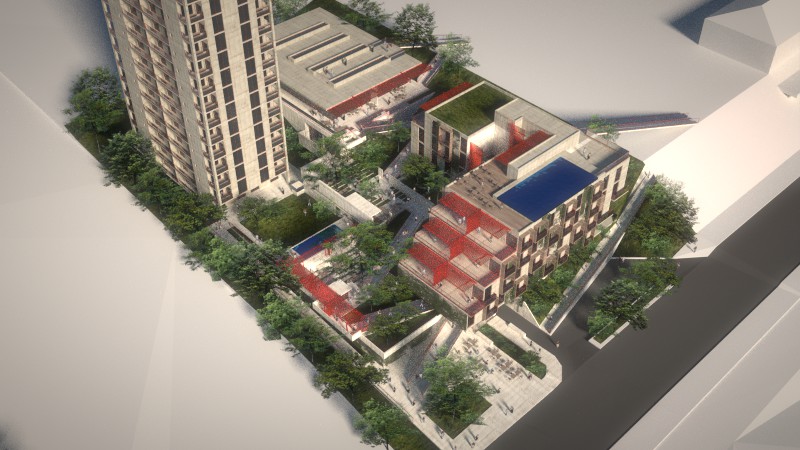 This high density becomes even more problematic with the approximation of very different and somewhat incompatible functions.

We choose to articulate these three uses around a strong, complex and catalyst public space: A succession of squares and ramps, that travel the distance and the difference of height between inferior corner (the main access) of the terrain and the higher level, where the project connects to the shopping center on the neighbouring terrain. 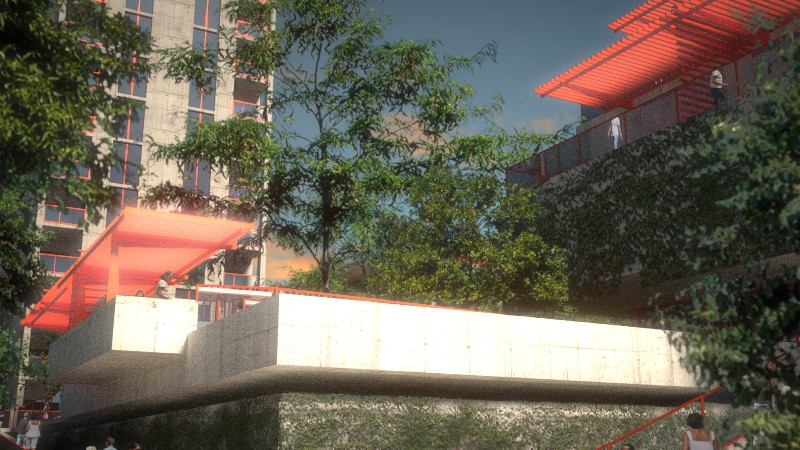 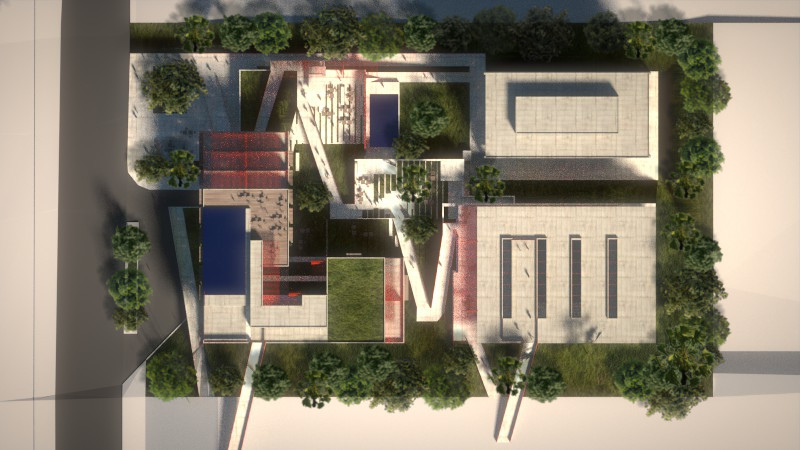 This way, the whole project does not bet anymore on a low density character, that would be expected for this scarcely built part of the city, but assumes a frank, higher-density urban character. The proximity of functions that seem at first sight discording, like a residencial building and a convention center, ends up giving additional qualities to the whole project, like an urban center.

The project recreates, therefore, some of the conditions that make people look for housing in animated urban centers, to benefit from the cultural, commercial and leisure options around.

To reach that objective, the projects bets mainly on its central public space. It serves as a glue between the different parts of the compound, permits the installation of commerce, restaurants, bars or coffee shops in the inferior levels of the hotel and the convention centre, and also directly on the public squares, all accessible to everybody. It also fosters interactions between the different functions, parts of the hotel can be used by the convention center and vice-versa. 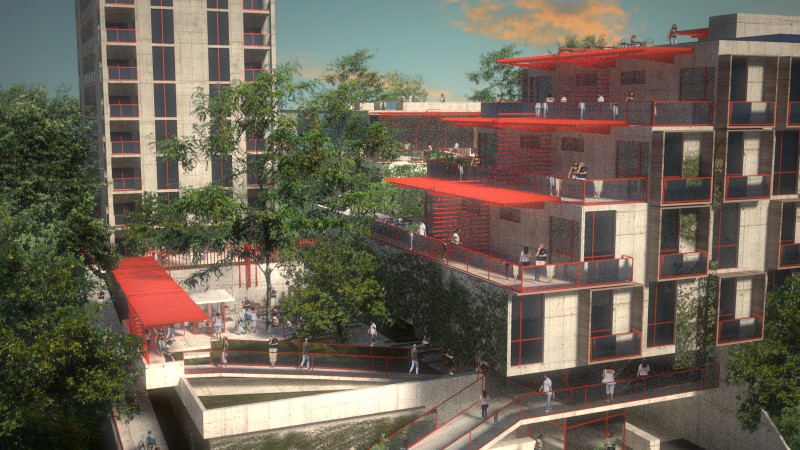 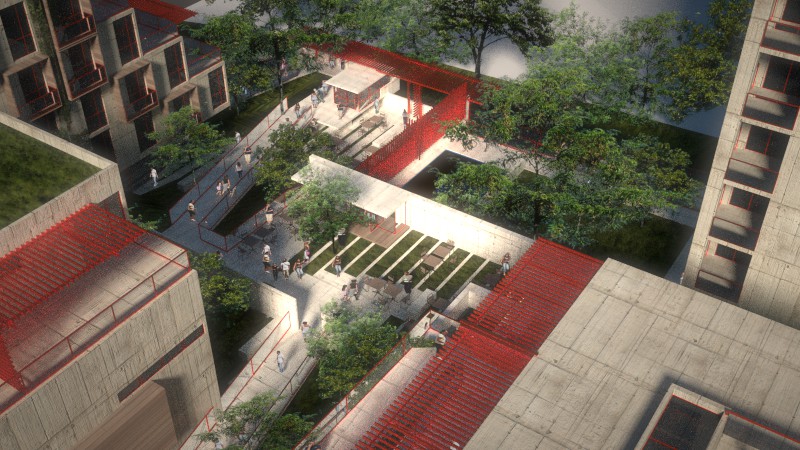 Inspired by Amanda Burden (head of urban development of New York under Bloomberg), the project also tries to create, within this connection, a public space that people want to use: with a lot of vegetation, somewhere to sit and something to do...

Although the high density of the project and the subterranean parking do not permit very tall trees in the central part of the terrain, we tried to use as much as possible the variation of levels, building heights, voids, volumes, openings present in the project to achieve similar qualities: Many different places and spots, with different lighting and sun exposure, different views, different uses, different orientations, to recreate the conditions of a complex and variate life.

Finally, this central space creates a new pedestrian connection between the shopping mall next and the lower side of the site, increasing the flow of people not only to the mall, but to the site itself. Both flows enhance each other, bringing life to the whole area, ensuring safety and recreation for the residential building, and consumers and general public for the hotel, convention center and shopping mall.

This shared connection serves as common access to all the buildings, even though each of them has separate entrances, located on the ground level and on the underground parking. 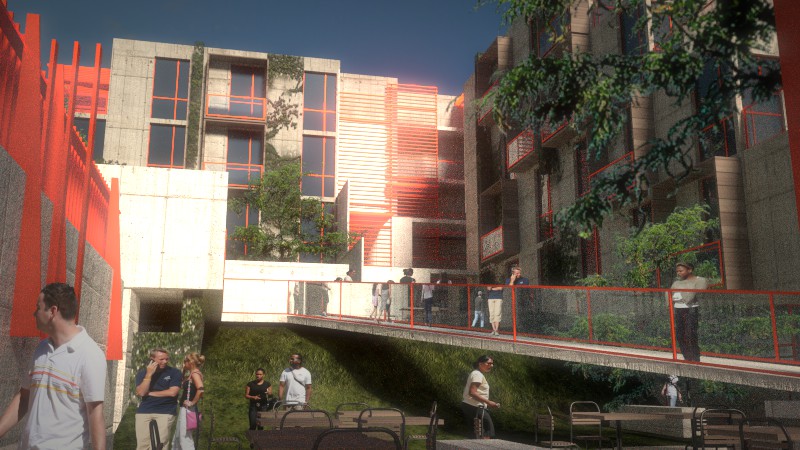